For four consecutive seasons, the Nuggets have failed to reach the postseason.

However with a maturing young core, which includes Nikola Jokic and Jamal Murray, and the acquisition of all-star forward Paul Millsap, many analysts are predicting this will be Denver’s best year in half a decade. Las Vegas oddsmakers have the team at an over/under of 45.5 wins.

So can the Nuggets return to the playoffs for the first time since 2013? We took to the digital realm of NBA 2K18 to see how the season pans out:
October 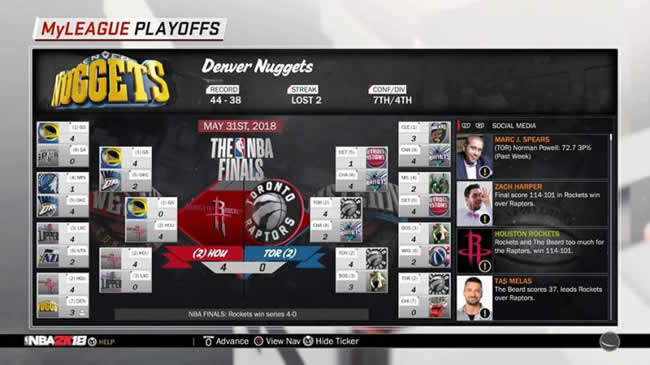 Slow starts have plagued the Nuggets in recent years — Denver has started 7-13 in each of the last two seasons — and there’s no change with the 2017-18 squad. The Nuggets stumbled out of the starting blocks again. Record: 2-5.

Denver battled to win six of its first seven games to start November. By the end of the month, the Nuggets climbed back into the playoff picture, sitting at the No. 7 seed in the West. Record: 10-4. Overall: 12-9.
December

The Nuggets built upon their strong November, winning 60 percent of their games to push their record to six games over .500. Record: 9-6. Overall: 21-15.
January

A 5-2 run to start the month gave the Nuggets a 35-23 record and a No. 6 spot in the West heading into the NBA All-Star Weekend. Despite the team’s success, no Denver player was selected to the all-star game. However, Denver stumbled out of the break, losing its next three games. Record: 5-5. Overall: 35-26.

The Nuggets recovered in the final weeks of the regular season and secured a No. 7 seed in the Western Conference. Record: 4-2. Overall: 44-38.

The Nuggets drew No. 2 Houston for the first round. Although the team fell behind 0-2 in the series, Denver made it interesting and pushed it to seven games before falling to the eventual NBA champions.

Recap: The addition of Millsap was immediately felt by the Nuggets, as the all-star forward led the team with 16 points per game, adding 7.2 rebounds and 3.5 assists. Jokic emerged as one of the league’s best, earning a third-team All-NBA nod. He averaged 15.6 points while leading the team in rebounds (10.2) and assists (4.7). Denver’s scoring attack was spread out with six different players averaging double figures, including Murray (12.7), Gary Harris (12.5), Wilson Chandler (12.1) and Will Barton (10.7). Kenneth Faried averaged 8.3 points and 8.2 rebounds off the bench.

Around the league: While the Warriors and Cavaliers won their respected conferences as expected, the simulation took some surprising turns once the postseason hit. Cleveland received a rude awakening by being bumped in the first round by the upstart Charlotte Hornets (what?). After being pushed to the limit in the first round against the Nuggets, the Rockets — led by Finals MVP Chris Paul — went 12-0 en route to a sweep of the Toronto Raptors for the title.

My NBA 2K18 is the best basketball simulation game on mobile devices. Developed by 2K Sports and based on the NBA official database, the game wins numerous of fans around the world. The player mainly plays NBA basketball games with real-life or customized players and teams. In-game currency is My NBA 2K18 RP, you can use it to buy your favorite players.

If you share the same character with me, that is, you are willing to spend a lot of time when you like something. off course, you will eventually find a way to prove its legitimacy in the end. I have discussed with my parents about the emphasis on the research of the article, saying that video games may be beneficial to the response of the human brain and the coordination of the eyes / hands. Later, the study pointed out that, according to student athletes statistics, a student athlete is likely to dominate the business world; I just want to use these data to convince my parents that I should be allowed to go outside to play as long as I want, Is this important as learning? having spent so much time playing MyNBA2K18, i found that i can get some reasonable benefits when playing MYNBA2K18 on this little application on the phone. If i do not have any other benefits, playing a defensive role in the game is also a very happy thing. your behavior will be judged by Your parents, spouses, colleagues or any one else who think you are too interested in your phone. therefore,I’ve summed up the 10 hidden advantages when playing MyNBA2K18.

Teamwork
I’ve already written about how much I love the addition of teams in MyNBA2K18 (shout out to my squad, ‘Forum Super Team,’ look out for us next RC, we’re going for top 10!). Having 14 other people relying on you in events gives you some semblance of responsibility. If you’re on a really good team then you and your teammates will help each other pro cards by giving discounts or send each other RP when you are in desperate need of hot streaks. Being a part of a team always has its ups and downs, filled with both triumph and drama; all things that are frequently experienced in relationships and the business world.

Understanding of Market Value
Not every MyNBA player takes advantage of this, but many do. If you have a card that you want to auction away then it’s in your best interest to do some research in the Auction House to see how much you can get for the card. Sure, it’s more likely to sell if you list it for a low price, but who wants to rip themselves off of some extra RP? List the card too high and you waste time having a card sitting in the Auction House that isn’t going to be purchased. On top of all the basics there’s much to be learned from the MyNBA card economy in general. MyNBA players closely monitor card value and get to see the effects of supply and demand (pulled a card that’s going to be an RC reward? LOTS of demand for that card!). especially when a new tier comes out, every card instantly changes in value. Studying market value in the app can absolutely help people understand real-world economics.

Math
I used to always hate math, it was my least favorite subject. I had a hard time learning math in class because it was so boring, meanwhile I was actually learning math outside of school without even realizing it. I would study my baseball cards religiously, pouring over statistics for my favorite players (Ken Griffey Jr. and Randy Johnson were my two all-time favorites, hall-of-famers in back-to-back classes!). Once I realized math was okay and helped me understand things I was interested in, then (and only then) I paid more attention in class. I believe MyNBA can help do the same for a new generation of kids that couldn’t care less about math class, yet they meticulously construct spreadsheets detailing how many game nights it takes to beat the RTTC, complete with the exact amount of Hot Streaks needed and numerous other statistical factors, like whether you’re playing +4s, 10s or 14s. Ever calculated how much RP you’ll actually receive from selling a card in the Auction House? Math. It may seem trivial but I think this app can help pique people’s interest in math.

Exercising Self-Control
Anyone with a bank account that’s plays MyNBA has been tempted to spend money on the app. I don’t have access to the official data but I’d bet the majority of (active) MyNBA players have spent at least some money on the app, if not this year than last year or the year before. In this situation you have to exercise self-control. Buying packs in MyNBA is highly addictive and you can learn a lot about yourself by how you handle those kinds of situations. Will you let your momentary emotions run rampant and go on a spending spree, or can you foresee the inevitable buyers remorse and hold off? While the spending issue is a negative aspect, you can turn it into a positive if it helps you learn/retain self-control.