After his first practice with the Denver Nuggets, Facundo Campazzo talked to reporters via video conference. The former Real Madrid star went through the necessary adjustments, playing alongside Nikola Jokic and other effective ball-handlers in Jamal Murray and Monte Morris, and what he brings to the table.

The 29-year-old Argentine guard who repeated his desire to play in the NBA many times, comes from Real Madrid, Spain, with whom he won two Euroleague and three ACB leagues.

While in Argentina the hours are counted to have an Argentine in the NBA again with Facundo Campazzo ready to make his official debut in the Denver Nuggets, the Cordovan gave himself another treat: he reached NBA 2K21. It took, but finally the base of the Argentine National Team has his player in the most popular basketball simulator in the world. 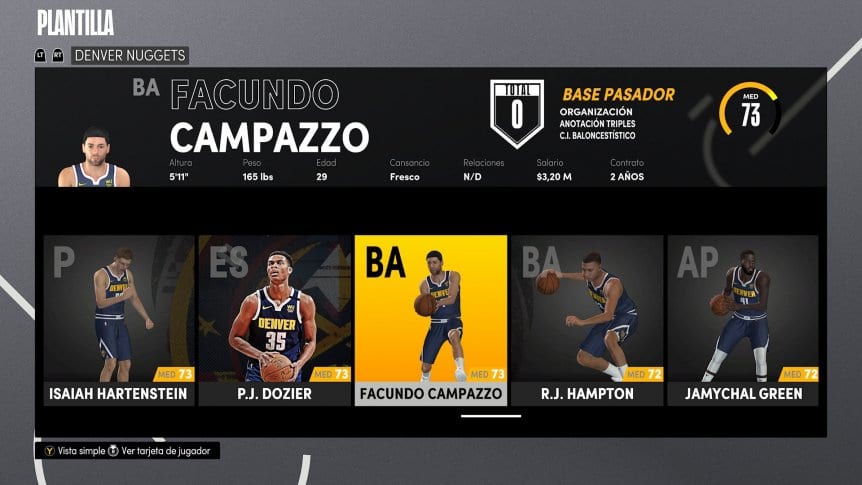 Facu is classified as a “Base passer” and his ability to organize play (A-) and his ability to hit triples (B) stand out. The controversy goes through his general average, which is 73 points, although it must be said that it is not very below that of his teammates and that it is more than acceptable, taking into account that he is a “rookie”. that is to say, a debutant in the league.

“I think the biggest difference is how quick the game is here,” he pointed out, “The game is very fast. I will have to get used to that. In Madrid, I played in a slower offense. Here you have to run, put in your space, get in the right position, play hard defense. Adapting will not be easy, but I will try my best.”

Campazzo is not the only compatriot to be found in the game, as there are two who appear as parts of historical teams and another who does so as a free agent.

The first of them is, how could it be otherwise, Manu Ginobili. The Bahiense has three different versions available, one for the historic San Antonio Spurs team (90 average valuation) and another for the squads of the 04/05 (87) and 13/14 (83) seasons.

The next to be found is Luis Scola. Luifa is part of the Houston Rockets squads for the 07/08 season and the Indiana Pacers for the 13/14. In the first of them it reaches 78 points and in the second 73.

It was made to wait, as 2K Sports waited until practically the start of the regular season. But finally, Campazzo is already in NBA 2K21 as a point guard for the Denver Nuggets. Listed as a base passer, the Cordovan has his strongest numbers in everything related to sleight of hand and his ability and intelligence to pass. Anyway, Facu is not yet known in the NBA and this version of him in the video game may just be the beginning.

To make you be the core player, you’d better equip yourself with NBA 2K21 MT. Z2U.com is the best NBA 2K21 MT Coins & Points trading platform with real sellers, accurate inventory, real evaluation and sales. If you are seeking for NBA 2K21 MyTeam Coins & Points, you are at the right place. Buy Cheap NBA 2K21 MT with PayPal now, and get the best deals today!