What do you see when you look at him play? Do you see the playmaker averaging 6.8 assists per game, the guy who keeps the ball moving and rebounds surprisingly well, the one who is pushing the Lakers to the third fastest pace in the league, the one energized their athletic bigs to get out and run the floor, and the guy who has been crucial to L.A.s unexpected 5-5 start?

Or do you see the player who is shooting 29.9 percent this season, the one shooting just 39 percent at the rim and struggling with decisions when the defense collapses, the one that teams are sagging off and daring to shoot, the guy struggling on defense, the one searching to find his way in the half court? Do you see the player some are comparing to Ricky Rubio and are saying will never be an All-NBA (or maybe All-Star) player?

It’s a Rorschach test, the answer says more about you — and your biases about Ball and the Lakers — than it does the player himself.

Ball is both those things — an impressive playmaker and a guy struggling with his shot and defense at the next level.

Ball is a young man going against grown-ass men being physical with him nightly in a way he has never had to deal with before. NBA scouts and staffs are now getting a body of film to study, tendencies to put into scouting reports, and they will take away what he wants to do (like get back and take away the long look-ahead pass). It falls on Ball to adjust (something that didn’t happen the same way at UCLA). The good news for Lakers fans is Ball puts in the work. 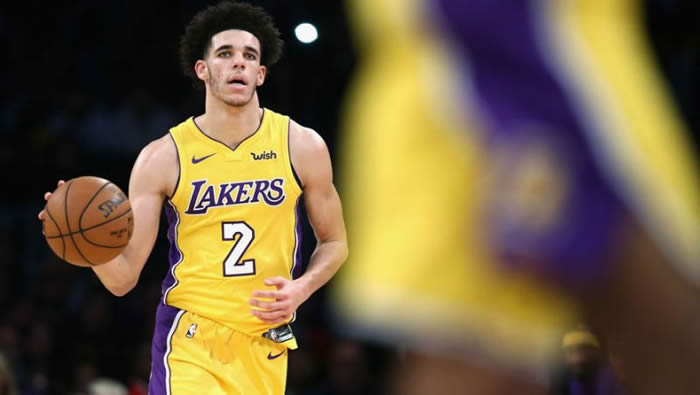 Pass first point guards tend to come along slower in the NBA than their scoring counterparts, just look at the first 10 games of Jason Kidd (his and Ball’s numbers are similar). That’s especially true for pass first point guards who don’t have great shooters around them — Ball does not. Brook Lopez is the best three-point shooter among the other Lakers starters (Brandon Ingram has a nice three-point percentage overall but was just 6-of-16 shooting in spot-up situations coming into Sunday, he has to get his buckets with the ball in his hands.)

Ball was not expected to be an elite scorer, he never was (he averaged 14.6 points a game at UCLA). Yet scoring, and making better decision on when to attack and look for his shot, is going to be the first hard lesson to learn. He has to start with being more comfortable with his jumper — until he becomes a bigger threat to score teams are sagging off him and daring him to shoot. When he did, lining up a wide open three deep in the fourth quarter Sunday while Memphis was making a comeback, there were audible murmurs of concern in Staples center from fans (they were right, he missed it and was 1-of-8 from three on the night, 3-of-13 overall).

“I want him to keep shooting. I’m glad he’s not turning them down,” Lakers’ coach Luke Walton said. “I’m glad he’s trying to put pressure on the rim. The way to break through (his rough start shooting) is to keep working, at practice coming in early and get the shots up, then keep doing it in the game. Eventually you will figure it out, especially if you’ve been a good shooter your entire life.”

“A lot of shots that are open I’m getting, now I just got to knock them down,” Ball said.