Cowboys Owner Jerry Jones yesterday reiterated his belief that the NFL is being “damaged by national anthem protests before games and described Cowboys’ sponsors as concerned about the perception that’s being created,” according to Brandon George of the DALLAS MORNING NEWS. He said there is “no question the league is suffering negative effects from these protests.” Asked what feedback he has received from Cowboys’ sponsors Jones replied “They would have concern. I would say the word would be concern.” George notes yesterday’s win over the 49ers was the Cowboys’ first game since Jones stated any players who disrespect the flag during the national anthem would be benched. The entire team stood during the anthem and Jones said “I thought our team did just what our fans want of them on and off the field and they won.” Cowboys DT David Irving “stood for the anthem but for the second consecutive game raised his fist after it was over.” Jones said that he had “no problem with what Irving did because it was after the anthem and he didn’t ‘disrespect the flag.'” Jones: “There will be ongoing discussion on how to address the real issues. Some of the issues that have happened around the flag have taken away from what we all want to see done better” (DALLAS MORNING NEWS 10/23). Jones indicated that his “number one goal is making and keeping the NFL product strong.” Jones: “I care about a lot of things. But our ability to be substantive is based on having a strong NFL a league that people are really interested in and want to watch games. … I am first and foremost a proponent of making the NFL strong. Making us have as many people watching the game as we can and watching in light of what we are doing and that’s playing football. If all this makes you stronger to represent messages let’s don’t do it in a way that tears down the strength of the NFL” 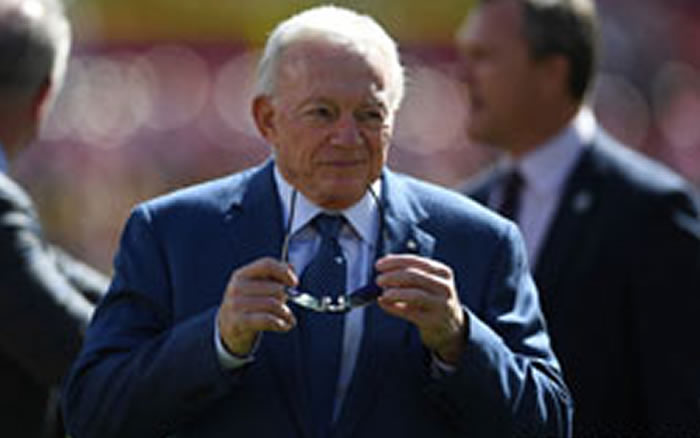 STICKING TO HIS GUNS: CBSSPORTS.com’s Jason La Canfora cites sources as saying that Jones was “quite vocal” at the owners’ meeting in N.Y. on Wednesday about his “displeasure over any NFL player not standing for the national anthem.” Sources said that Jones was the “only owner to rail against the handful of players who are still regularly kneeling standing or staying in the locker room during the playing of the anthem … pronouncing his disagreement with how the NFL is policing the matter before all 32 teams.” There were “no dissenting voices or debate about how the ongoing protests were being handled” during a meeting on Tuesday attended by a select group of owners league officials players and NFLPA leadership. That “changed on the second day of the meetings,” as Jones expressed his feelings “in what sources describe as a ‘firm and forceful’ manner but restrained and not over the top.” However he did “not stipulate that he wanted the matter brought up for debate there was no discussion of actually altering any NFL policies no other owners supported Jones’s stance during the meeting and most of the time at these sessions was spent discussing how to move ‘from protest to progress,’ rather than focusing on the protests themselves” (CBSSPORTS.com 10/22). In Dallas David Moore noted Jones is “no stranger to the outlier role” as he has “always been a rebel with a cause.” But this “feels different.” There were “whispers … that some of the owners were upset with Jones believing the league had begun to move past the divisive issue until Jones issued his stand or sit remarks in the wake of the team’s loss” to the Packers in Week 5 .

NOT WORTH THE HEADACHE: THE MMQB’s Peter King notes only 1.1% of the players in games this weekend heading into “MNF” did not stand for the anthem the way Jones and NFL Commissioner Roger Goodell “would want.” Had Goodell “issued an edict that all players must stand and those who do not will be sanctioned either with a fine or suspension,” there likely would have been “scores of players either sitting or kneeling or performing some sort of civil disobedience for the anthem.