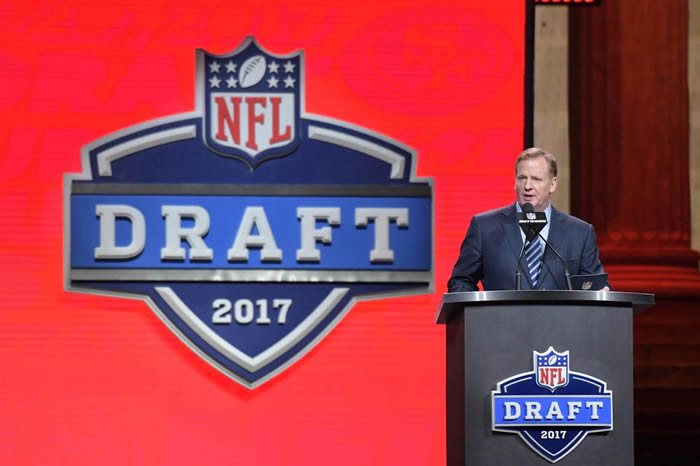 One year after building its own venue at the Philadelphia Museum of Art and earning rave reviews for what was essentially a three-day party the NFL draft is on the move again. The 2018 event will take place at AT&T Stadium the NFL announced Wednesday.

Last year’s event served as a major win for Philadelphia which blended an iconic backdrop with rowdy fans to create one of the most memorable events in draft history. Cowboys owner Jerry Jones never one to be outdone is sure to dial up an even bigger setting to ensure a Texas-sized draft experience.

“Philadelphia raised the bar by taking the Draft to another level and this new opportunity in Dallas will enable us to continue the event’s evolution and grow it even further,” commissioner Roger Goodell said in a statement. “We are grateful to the Dallas Cowboys the cities of Arlington Dallas and Frisco and the Dallas Sports Commission for their leadership in turning this vision into reality.”

The NFL said that the draft site “will encompass the field stands and outdoor plazas creating an all-encompassing atmosphere and enabling more fans than ever before to watch their favorite team’s selections.”

Dallas beat out a long list of interested cities to earn hosting rights. Chicago Canton Denver Green Bay Jacksonville Los Angeles Philadelphia and Pittsburgh were all reportedly in the mix for 2018 duties. The Cowboys’ facility which blends a major population center with a storied NFL franchise made too much sense to pass up.

Dallas marks the third city to host the draft since it left its usual setting of New York City in 2015. The event had called the Big Apple home for 50 consecutive years before leaving for Chicago in 2016. Last year’s move to Philadelphia set off the barnstorming tour that has football fans and city officials alike clamoring for Roger Goodell’s presence and the boatloads of tourist revenue that follows.

April’s draft was expected to bring an $80 million impact to Pennsylvania’s largest city though few economic experts bought into that prediction. Even so with more than 100,000 people attending the event the draft was clearly a boon for Philadelphia. Officials in the Lone Star State will have to hope for a similar turnout next spring.

The 2018 NFL draft should be exciting. Unlike 2017 a handful of top-level passing prospects could create a feeding frenzy for quarterback-hungry teams. USC’s Sam Darnold Wyoming’s Josh Allen UCLA’s Josh Rosen and 2016 Heisman Trophy winner Lamar Jackson of Louisville could all crowd the top 10 picks of a star-studded draft.

They’ll have to pick out a breathable fabric when they order their suits for next year’s draft. Texas gets pretty warm around late April.

To buy cheap NFL 18 Coins we www.mmocs.com is your best choice for our fast delivery and safe trade system. 90% of the MUT 18 coins will be delivered within 30 minutes. Professional online service allows us to efficiently and confidently deal with all kinds of issues and guarantee Madden NFL 18 Coins with 100% safe. If you have any questions about the trading process please contact with our 24/7 customer service. We wish you a happy game!