rior to tonight’s season opener between the LA Clippers and Los Angeles Lakers, we simulated the game using NBA 2k18.

The game is just a few hours away, but we here at Clipperholics are just too antsy to see the LA Clippers play a meaningful basketball game, so we simulated it. Using NBA 2k18’s MyLeague mode, we started a new season with the “Start from today” option. We also slightly tweaked the rotations to simulate what we expect Doc to do. (Example: 2k had Sam Dekker playing over Wesley Johnson, which didn’t look to be the case during the preseason).

Here are the box scores for the game: 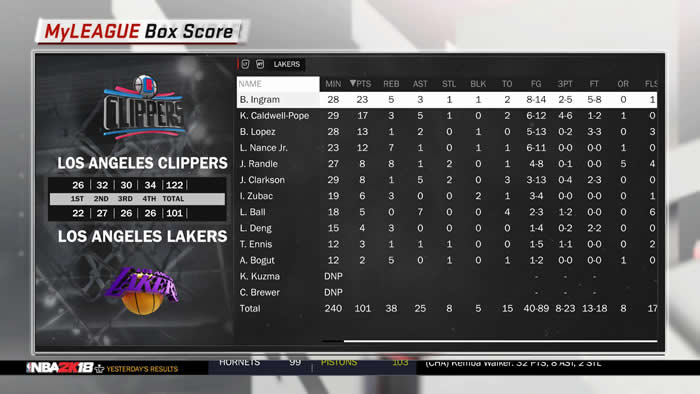 Ingram went off, scoring 23 points on 8 of 14 shooting. Meanwhile, rookie Lonzo Ball did not have as good of game. He fouled out and only scored 5 points. He did have 7 assists though. 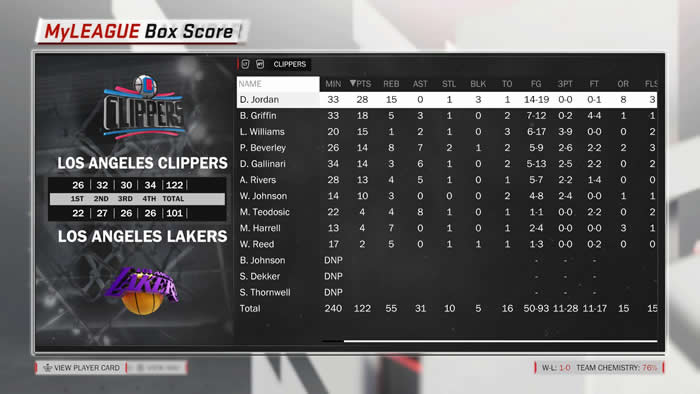 Okay DJ. DeAndre Jordan absolutely went off. Honestly, the whole team performed pretty well, but DJ took it to another level. He somehow only managed 1 free throw, despite 19 attempts from the field. The AI must have fed him lobs the whole game. Blake Griffin also poured in 18, while Lou Williams dropped 15 off of the bench.

NBA 2k18 is crazy. While we do think the Clippers will win tonight, we don’t think that DeAndre is going to go for anything close to 28 and 15. (Although, we hope we’re wrong). Let’s just hope the results end up going in the Clippers favor.