Marc Bergevin has said on many occasions that acquiring a top centre is only possible on PlayStation. This off-season, he also said that if you want loyalty, get a dog.

Well, I have good news for the Montreal Canadiens GM. You can get loyalty on PlayStation, too.

The newest iteration of EA Sports’ annual NHL game allows you to take over the Vegas Golden Knights (or any other team) the date of the expansion draft. And that opens up a whole lot of possibilities. In fact, both times I have taken over an expansion team and re-done the draft, both Andrei Markov and Alex Radulov re-signed with the Canadiens before July 1.

Of course, because it happens at the expansion draft, it means you can’t undo anything that happened before such as the Nathan Beaulieu or Jonathan Drouin trades.

That’s just one aspect of the replay ability that previous games just didn’t have. On top of re-doing the Vegas expansion draft, you could even customize the protection lists, and add a 32nd team to the league and have two teams drafting from the pool of players made available. 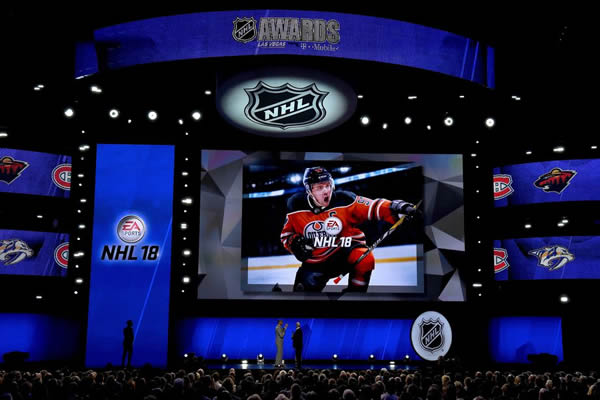 At release, this feature didn’t work that well as it put my Quebec No Dekes team in the Western Conference. However, the first update added the option to have a custom realignment before any new franchise – with 31 teams or 32. It also allows you the option to customize the 31st and 32nd AHL teams – even creating their mascot.

The biggest addition to the game this year was NHL Threes. If you haven’t seen it, think NBA Jam on ice. It’s a three-on-three arcade style game with game-changers such as Money Pucks which count for multiple goals (either added to your score or removed from your opponents’).

While it’s not personally my cup of tea, it is fun from time to time and some people will probably love it.
Season’s Greetings

Another new addition was the Champions Hockey League. If you aren’t familiar with that, think Champions League in soccer but with hockey teams. The game not only has the teams that were in the most recent tournament, but you are able to play your own tournament in season’s mode.

You could also play a season with many other leagues in the game, including the AHL, Liiga, SHL, and others. Again, it is something that gives you another option to keep the game fun and fresh.
Gameplay

The game is a more polished version of last year’s but if it wasn’t for the extra teams, you wouldn’t really be able to tell at a glance that the game was updated. The actual game play does look and feel like last year’s version.

Having said that, last year’s version was good so there weren’t many changes that needed to be made and this year’s version is worth especially if you enjoy the possibilities that customization gives you, either re-doing the expansion draft, or creating a 32nd team.

You could even take over the Canadiens and add a 32nd team and see how that shakes up the league. Of course, you could also take over the team right before this season if you want.

The game is not perfect, but at least the options and the new Threes mode will keep the game from getting stale. If you can’t find a way to play NHL 18 and have fun, it’s not for a lack of options.

Final Score: 8/10
While there are customization options, franchise mode is essentially the same as previous years, but with the addition of mid-season contract extensions. However, when previously the only way to shake up the game was with a fantasy draft, the expansion options are very welcomed additions